Copy to the clipboard and paste in the main program

Rename files and folders in batch

How to use Batch Rename

Just like its name,Batch Renameis a plug-in that can batch rename folders or files.

The first thing you need to do is to drag the renamed files into the blank space.You can also upload the files locally via theBrowsebutton.As shown in the picture,in the lower left corner,you can adjust the order of the files according to the file name,size,creation date,and modification date.It supports four types of file batch renaming,they areFormat,Replace,AppendandExtension. 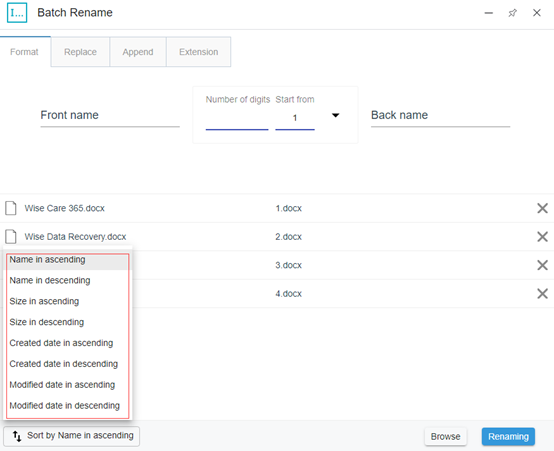 Format supports users to modify the front part,the middle part and back part of the file source name.The drop-down menus in the middle part are number,uppercase letters,andlowercase letters.The default initial number of the number part is 1.The number of digits is empty by default.You can choose one of them according to your needs.

2.Replace:Replace and rename the same part of the file source name.

3.Append:Rename the file at the front or back in batches on the basis of keeping the file source name.

Suppose we modify the previous part to2021and the latter part toseries.Then clickRenaming.The result is as shown in the picture.

4.Extension:Rename the extension of the file.

Suppose we modify the extensiondocxtopdf.Surprisingly,this function also supports converting pdf files into docx files.The result is shown in the picture.